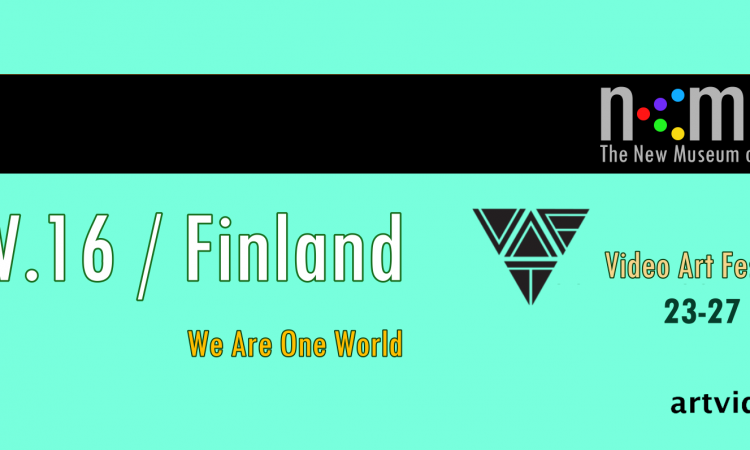 artvideoKOELN & The New Museum of Networked Art
are happy to announce

Bill Hill (USA), Tabula Rasa, 2016, 4:00
Tabula Rasa, 360-degree immersive augmented reality installation, engages the audience into a transformative, spherical-space that peels away time and space to show the metaphorical impact of technology on human evolution and the history of indigenous people of Northeast Florida.

Using Google Cardboard as an interface, this performative installation utilizes the initial encounter between the indigenous peoples of North America with European explorers and builds a narrative around the use of a chair as a metaphor to underscore the generic contradiction of expansion that evolution serves over its subject, and the specific of electronic technology over nature.

claRa apaRicio yoldi (Spain) – RAM_city (1000 screens), 2014, 06’20’’
In this new city there are no monuments or heroes to commemorate. The history of this city is not made up of individual moments despotically imposed, ensuring their presence into the present. Here, nothing crystallizes as a fixed memory. It is a continuous exchange, a permanent awakening. Culture is not marked by tradition and inheritance rules, nor by the need to follow the same canon.
In RAM_city everything is disagreement, there is nothing to be concluded as real. The formation of the imaginary is a continuous and open negotiation. Not between individuals and the state, but among the units of work, performance and exchange.

Katya Yakubov (Usbekistan/USA) – Maps to the In-Between, 2015, 07:23
A mining of a digital space finds characters and forms in dialogue, and a playful hint of narrative begins to emerge in this twice-appropriated landscape. Eventually, the great Apparition lets it all fall down.
.
Coalfather Industries (USA) – User History, 2016, 6:02
User History is an absurd ethnographic survey of the lives of contemporary humans as seen from the perspective of post-human machines.
The piece questions where we are headed as a species given our current rate of apathy and consumption. It imagines what will happen to the planet if we all continue to use up all the resources.
This video consists of animation and site-specific performances, filmed on location in New York (Governors Island and Rockaway beach), Route 66 in Illinois and in central Finland.

Pablo-Martín Córdoba (France) – L’inter-code, 2017, 10:00
Strengthened by the soundtrack, L’inter-code opposes images and texts in line with the ideas of Vilém Flusser: texts and images confront one another in the representation of the real world. This dialectical relationship, whose synthesis is yet to be discovered, is matched in the video by another opposition: tribal men living in equilibrium with nature, contrasting with the divergences of technical progress. L’inter-code questions the possibilities and limits of science and its materialization in technology.

Eija Temisevä (Finland) – An Attempt to be Earth, 2016, 5:15
Comforting Nature, comforting Earth. Soft grass, flowers, forest, rocks, stones, trees. The mold of garden, the field of sand. The babbling streamlet, the water. The dance of the spirit of the forest. The horns are left like old rock paintings.
A symbolic performance about the comforting things in the Earth. Quite near I live.

The New Museum of Networked Art was happy to present WOW.27 / Tunisia in a

END_OF_DOCUMENT_TOKEN_TO_BE_REPLACED

The New Museum of Networked Art is happy to present WOW.26 / India the 7th

END_OF_DOCUMENT_TOKEN_TO_BE_REPLACED

The New Museum of Networked Art is happy to present WOW.24 in the context of

END_OF_DOCUMENT_TOKEN_TO_BE_REPLACED

WOW.23 / Latvia The New Museum of Networked Art & A Virtual Memorial Foundation are

END_OF_DOCUMENT_TOKEN_TO_BE_REPLACED

artvideoKOELN & The New Museum of Networked Art are happy to present WOW.22 @ Now